History of the Jordanelle

Visions of turning the Heber Valley into a mecca for year-round outdoor activities have been brewing in the minds of residents and visitors since the 1950s. With the Mayflower Resort well underway and the development of vacation homes and permanent residences sprouting up around the valley, that vision seems to have come to fruition. But this quickly growing resort town owes its prosperity to the farming and mining that brought people to this incredible valley. The villages that contributed much to that prosperity lie under the picturesque waters of the Jordanelle Reservoir.

Keetley was the largest township to be flooded by the advancing waters of the Jordanelle. It started as a mining shaft in 1875-6 when the Park City Mining District picked the site for a drainage tunnel. The tunnel took six years and over half a million dollars to complete. By then, Camp Florence, which would later become Keetley, was a large mining camp.

George Fisher grew up playing on the mountains above the mining shaft. Like many children of the day, George admired the hard-working men that labored tirelessly in the mines, but none as much as John B. “Jack” Keetley. Jack Keetley was the charismatic ex-Pony Express rider and prospector in charge of managing the drainage tunnel. It’s easy to imagine Jack enchanting the children of the mining camp with stories from his Pony Express days, and how he bought a mining claim in Bingham with a horse, saddle, and six-shooter. When young George Fisher grew up and became a successful cattleman and developer, he would end up naming the growing community after his childhood idol.

The big boom for Keetley wouldn’t come until the 1920s when the Park Utah Mining company struck what would become the richest ore deposit in Wasatch County. By then, George A. Fisher was the mayor of Keetley. He built many of the essential structures of the town, including a schoolhouse, apartment complex, a store and gas station, and five modern homes. At its peak, 600 men worked in the mines around Keetley.  Many of them brought their wives and children to live in the town or communities close by.

Not well known by Wasatch County residents or Utahns, in general, is that there was a small camp of Japanese-Americans in Keetley during WWII. Before the government started forcing Japanese-Americans into internment camps, some were allowed to “voluntarily” move inland.  Fred Isamu Wada relocated to Keetley from Oakland, California, because his wife was from Utah, and it had a railway station. Wada leased 3,500 acres of land for farming from George Fisher for $7,500 annually. Fifteen families followed Wada to Keetley and created Keetley Farm, a non-profit organization whose harvests supported the American war effort. Unsurprisingly, the anti-Japanese sentiment was high in the valley, but that quickly changed. The new-comers were quiet, hard-working families. Their evident dedication to American success won over the residents of Keetley and the valley as a whole.

With the hunt for mineral riches well underway in Keetley, smaller communities popped up to support the mines. The village of Hailstone, also known as Elkhorn, and the Murdock Power Plant contributed much-needed power, produce, meat, and lumber to the miners and mining companies. The power plant was built in 1910 and operated by Utah Power and Light. Five well-kept homes with lovely green lawns, provided by the plant, housed the laborers and their families. In Hailstone, the Great Lakes Timber Company provided the necessary timber to bolster the tunnels of the mines in Keetley and Park City. By the time the company moved from Hailstone, it was one of the largest timber companies in the country.

Another small community now rests under the Jordanelle dam itself. John Jordan bought the property in 1875 and ran cattle and sheep there until 1931. The land was on the thoroughfare from Heber to the mines in Keetley and the Murdock Power Plant. The Jordans ran a small cafe/coffee shop for travelers on their way to Salt Lake or up to Heber. For a short while, there was even a dance hall.  The Jordan family held a contest to name the dancehall with the lucky winner receiving a car. The winner came up with the name Jordanelle. The dancehall burned down, but the Jordanelle name lives on thanks to the descendants of John Jordan. They fought the Bureau of Reclamation to name the dam and reservoir after the Jordans.

More endearing narratives of these communities lie in the memories of some of Heber’s older residents. Merle Davis, whose father worked at the plant, speaks fondly of life there. She recalls how close-knit the community was, and how children of all ages rode the bus down to Heber for school. “It was a great place to grow up,” she reminisced. Russell Cummings, one of the descendants of John Jordan, echoes this sentiment.

“I used to fish on the river when I was a young man. I had everything I wanted to do. As I look back on it now, I don’t think there was a better way to grow up.”

Small town life had its perks and its drawbacks. “Everyone knew each other’s business,” states Russell Cummings. The phone system back then was a bit like morse code. You knew that a call was for you by the way the phone rang. “A call would ring into everyone’s phone. Our phone number was 01F11. After mother would pick up a call, she’d hear a click, click, click as neighbors would pick up to listen to her conversation,” Russell chuckles.

Rotary phones and five-digit phone numbers are relics from another era. As we move forward and transform this small farming community into a world-class resort, we should look to those that came before us and show appreciation for their grit and determination. They built this valley with muscle and might. Though some of this precious history now rests underwater, what they and their relatives helped create is a community we are all lucky to call home.

For a more in-depth reading of the Jordanelle, we enjoyed this article published in the Utah Historical Quarterly, “Keetley, Utah: The Birth and Death of a Small Town” by Marilyn Curtis White.

We SELL the Jordanelle 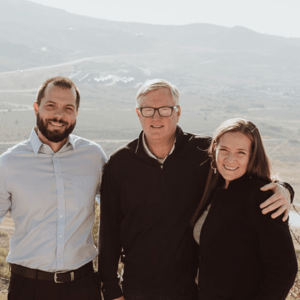 As Jordanelle residents and Realtors® selling the area for the past 10 years, we can tell you about the history, living around here, and investing here.

We know the Jordanelle!  We love living here, we hope you will too-

As Specialized Buyer Agent for the Jordanelle area, David is hardworking and knowledgeable about the ins and outs of each community and nuances within.

Schedule a 15 Min Call with Our Team